A celebration of winter solstice also known as Shab-e Yalda or Shab-e Cheleh in Farsi is one of the most ancient and celebrated events in Iran.

Every year, on December 21st, the last night of autumn, Iranians around the world celebrate the longest and darkest night of the year, the victory of light over darkness, arrival of winter, and the renewal of the sun on Yalda night. Yalda is a time when friends and family gather together (most often at the home of grandparents) and stay awake all night long enjoying a fine dinner.

Food plays a central role in this night celebration and it is for sure the delicious part of it. So in this night, setting and designing tables, drinking, eating dried nuts, and fruits like watermelon and pomegranate are so common.

The red color in these fruits symbolizes the crimson hues of dawn, the glow of life, and invoking the splendor of Mithra.

It was used to put these items and more on a korsi. (A type of low table with a heater underneath, and blankets were thrown over and around it which people sit around).

Storytelling, making good wishes, reading Shahnameh (The epic book of the great Persian poet, Ferdowsi), and reading poetry (especially the poems of Divan-e Hafez) is also practiced in Yalda. Everyone makes a wish and opens Hafez’s book randomly which is believed to be an interpretation of your wish.

Yalda is a Syriac word which means birth and it’s a turning point of the year. In the next coming months, the days will grow longer and the nights will be shorter. 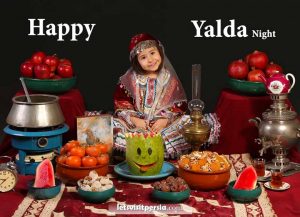 The ancient Persians built fire on sundown of this night and kept it burning until they see the rays of the sun.

Yalda is not just the longest night of the year, it is also the eve of the birth of Mithra, goddess of light, who symbolized goodness and strength on earth.

This celebration comes from the Zoroastrianism religion. The time when ancient Persians were advised to stay awake for most of the night, lest misfortune should befall them, and gather together until evil is gone till the light shines again and goodness prevails with light’s victory at dawn with Mithra’s birth.

Early Christians linked this ancient Persian celebration to Mithra and to the birth anniversary of Prophet Jesus (PBUH).

It is also celebrated in other Central Asian countries such as India, Tajikistan, Afghanistan, Turkmenistan, Uzbekistan and some Caucasian states such as Armenia and Azerbaijan.