Yazd city is a spectacular historical city in central Iran. It is located between Isfahan and Kerman, 270 km southeast of Esfahan. The province is largely desert which is called Kavir in the Persian language. 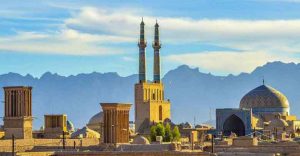 It became the capital during the Muzaffarid dynasty who ruled in the 14th century. They came to Yazd city after Khorasan, because their original birthplace was attacked by Mongols. Some of the rulers settled in Meybod, another town in this province.

Marco Polo mentioned it as a noble city which has a great amount of trade. it’s registered as a UNESCO heritage site in 2017. 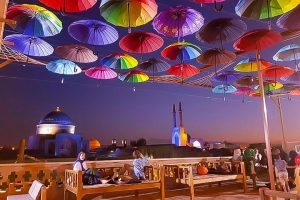 The old city of Yazd city

The geographical features of this area have made its people developed special architectural styles. For this reason, in the old part of the city, most houses are built of mud-bricks and have domed roofs. These materials preventing heat from passing through.

A trip to Yazd city will make you familiar with life in this deserted town and how people adapt to it. You will learn about underground water system (Kariz or Qanat) for which Iranians are well known, The water reservoirs, icehouses (Yakhchal), wind catchers (Badgir) that were designed to bring cool air from underground and wind to the buildings chamber and also pigeon towers to use their eggs, flesh, and dung.

Most of all Zoroastrians in Iran are living in Yazd city. the fire temples in the city and also in some villages around had become historic pilgrimage sites for Zoroastrians from all around the world.