Look at Iran’s location on the map and easily you will understand why the scope of native foods and Persian food is so wide.

Iran is part of the Middle East but it has close ties to Europe, Africa, and the Far East. According to history, the major influences came with traders who brought new spices and foods to this land from all directions, but mainly from India, the Mediterranean, and to China. 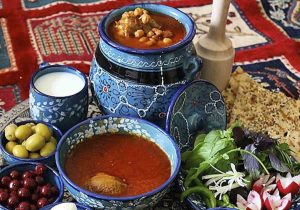 The base diet remained quite firm, in fact, the Persian base of bread, meat, and rice didn’t change at all. However, the addition of new spices changed the Persian diet little by little. Nowadays the greatest Persian food prepared by the spices from India and some style from Turkey.

Ancient Persians exported their products to all the corners of the world especially, pomegranate, saffron, and spinach. The traded goods, such as rice, lemon, and eggplant now feature prominently in the national Iranian meals.

Persian food is not just about delicious foods it is also therapeutic for your body and soul. The legendary Persian Physician and Philosopher, Avicenna, in his book The Canon of Medicine which can consider as a masterpiece, describes the beneficial aspects of different foods, fruits, and vegetables for the body. He explains that the human body has a temperament that must become balanced by food and drinks’ nature. 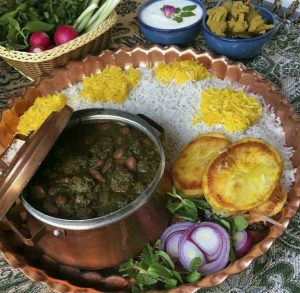 In Iran, you might hear that some foods are cold or hot. For instance, Banana, pepper, and lamb have hot nature, Watermelon, Yogurt, and fish have a cold nature that is why Iranian try to make a balance with adding Different ingredients to their foods. These ingredients could be Spices, herbs, or even dessert.

Traditionally, Persian food mixed the variety of fresh herbs and spices such as saffron, barberry, pomegranate, dried fruits, nuts, and beans. The result is a unique taste dish that does not present one distinct flavor but serves up layers that keep the taste like guessing what is it and what’s the next.

Iranian cuisine has a lot of similarity with Middle Eastern countries, where wheat play the main role, chicken and lamb are well-utilized and yogurt is a common drink. The sour flavor is evident in most Persian food and mostly it comes from the adding of lemon, sour orange, and pomegranate.

Many ingredients are native to Iran, including walnuts, pistachios, almonds, saffron, pomegranates, mint, oranges, and grapes.

Rice and bread are the staple parts of the Iranian dishes which they eat with meat and vegetable along with different herbs and also yogurt as a drink. 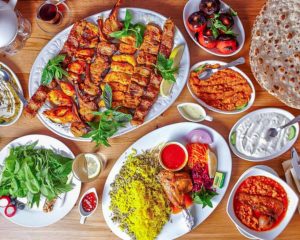 Iranian bread has a wide range and can be considered as the tastiest in the world. Plain rice which is also called Chelo can either eaten with a kebab (pieces of meat, chicken, or barbecued/grilled meat on the open fire) or with one of the many kinds of khoresht (stew). Khoresht is composed of pieces of meat and vegetables such as eggplant, potatoes, marrows, etc. cooked in a relatively thick sauce. Chelo-kebab is commonly eaten with grilled tomatoes, vegetables, and herbs such as mint with the red powder of Somac.

Abgoosht is similar to soup and contains boiled fatty pieces of lamb, tomatoes and potatoes, and dried peas and beans, with dried lime to give it a slightly sour taste. It is left to simmer for a couple of hours.

Aash is similar to soup with all sorts of cereals, herbs, and vegetables, sometimes with meat added. There are many different types of Aash depending on the region of the country, but a few are popular everywhere in the country such as Ash-e Sabzi which is eaten as breakfast.

Most provinces have their special dishes. In the north on the Caspian Sea and the south, on the Persian Gulf, people naturally eat a lot of fish and prepare many dishes with seafood. Both in the north or south of the country, many fishes exist that allow the variety of delicious dishes to be prepared. 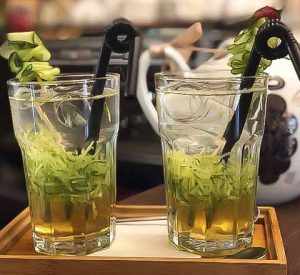 Iranians also make different types of sweets, they put pieces of pistachios, almonds, and hazelnuts as well as dried fruits. Kerman, Yazd, and Tabriz are well known for their sweets. The Sohan of Qom, Gaz of Isfahan, Kerman’s Kolompeh, and kolooche in Gilan are well known throughout Iran and are very delicious.

Iran has a wide pipeline system all around the country, and the water is clean, fresh, and cheap. All kinds of international drinks in Iran are accessible. You can find all kinds of coffee, tea, juices, milk, and soft drinks, including many well-known international brands.

Tea is one of the most popular drinks in Iran and if you are looking for something more unique and local, Iran has different options: dough is a yogurt-based drink which is mixed with mint, and many types of sherbets with different flavors are also common.

Dizi (Mixture of the well-cooked Meat, bean, and tomato)

Some of the most famous Persian food and their original city