Kashan city is located in the north of Isfahan (218 km) between the Karkas Mountains in Natanz and Kavir Desert. The north and the west part of the city is surrounded by Kavir desert, and it enjoys a warm and desert climate. 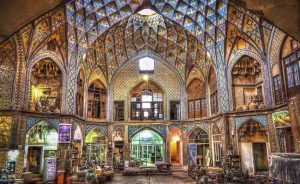 Archaeological Researches in the Sialk Hills (Tapeh Sialk) which lie 4 km west of Kashan city reveal that this area was one of the primary centers of civilization in prehistoric ages.

Hence the city dates back to the Elamite period of Iran. The ruins of Sialk ziggurat still stands today in the suburbs of this city after 7,000 years.

Like many other cities in Iran, this city has been also a community of Zoroastrians before the Arabs’ invasion. 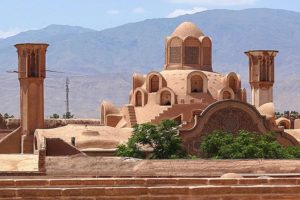 In the 11th century, Khwarezmians built a huge fortress inside the city, and a wall called Jalali to protect the inhabitants.

Safavid kings showed a specific interest in this area and Fin Garden was built as a Persian Garden for Shah Abbas who stayed there during his trip Which is inscribed as a UNESCO heritage site in 2011.

Qajars kings continued this particular attention especially at the time of Fath Ali Shah who added a few sections to the garden.

Aside from its magnificent history, Kashan city is well known for rose water and rose oil which are the main products of the city.