Iran which is historically known as Persia refers to the Persian Empire, one of the greatest empires of the ancient world with a large number of imperial dynasties. 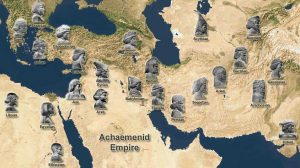 For at least 2600 years, to the year 1935, Iran was known as an ancient Greeks name Persia in the West.  But in 1935, the Iranian government decided to change it in public and it should be called Iran. They wanted to symbolize a new era in Iranian history and from that time on, all embassies were requested to call the country Iran.

The waves of different invaders throughout its long history, such as the Greeks accompanying with Alexander, the Arabs during its Islamization, the Turkish armies which forced their way to the west from central Asia, and also the Mongols, they all left their marks and affect the people of Persia but finally, in turn, were absorbed into its cultural and unique world.

Under the rule of Achaemenians, Seleucids, Parthians, and finally, Sassanids the era of the magnificent Persian Empire terminates with the rise of Islam by the Arabs invasion and its spread into Persia.

The last fourteen centuries of Islamic history of Persia is affected by the rise of Turkish dynasties, such as Seljuqs and Ghaznavids, Mongol and Timurid invasions, re-establishment by the Safavids and western domination during the Qajar dynasties and finally the foundation of modern Persia, that led to the Islamic Revolution which turned Iran into Republic.

For many Westerns, the word Persia is a reminder of ancient monuments and beautiful works of art such as carpets, tiles, antique ceramics, miniatures, and metalwork.

It also shows a present reality in the heart of Asia, a land of both geographically and spiritually the Mediterranean culture with the Indian subcontinent. And Persia is indeed such a magnificent reality, an ancient world and contemporary, linking the heartland of Asia and the Western civilization, a bridge between East and west.

Besides, through the heart of its traditional culture, it has been a bridge between heaven and earth, reflecting the color of its shiny skies and its famous stones, the turquoise, and the stone which Persia has been known throughout the world.

Recent archaeological studies prove that as early as 10,000 BC, people lived on the southern shores of the Caspian Sea, one of the few regions of the world which scientists believe escaped the Ice Age. It is said they were probably the first men in the history of mankind to use agriculture and animal husbandry. 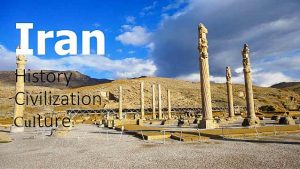 Archaeologists believe that wherever in Iran, they can put in their thumb and pull out an archaeological plum. Human settlement and civilization on the Iranian plateau go back much further than the Achaemenid dynasty.

There is numerous evidence of human habitation in Iran from the 9 millennium B.C. and in tracking movement of the early settlers, pottery has played a special role. There are innumerable archaeological sites all over Iran covering all periods of Iran’s past from pre-Islamic to Islamic times.

Excavation of mounds (Tappehs in the Persian language) from the mid-19th century has opened windows on Iran’s civilization and art in all aspects of its long history. Tappeh Marlik in Gilan with all its priceless treasures, attesting to the high artistic skills of ancient craftsmen in that plateau.

Tappeh Hasanloo near the Lake Orumieh where the golden bowl of about ninth century B.C. was found.

the 4-5th-millennium Tappeh Sialk in Kashan where the art of Iranian pottery was born. two other important sources of Iranian prehistoric pottery are Tappeh Hesar, near Damghan and Turang Tappeh near Astar Abad.

Sang-e-Chakhmagh Tappeh, near Qazvin, dating back to 7,500 years, as the Sialk settlement. the Median Tappeh Nush-e-Jan, near Malayer, revealing silver gears and ring-money belonging to about 760-600 B.C., like shattering the idea that the Aegean coins of the Greeks found the world’s first coins.

Godin Tappeh and Median The Urartian site of Haftavan Tappeh near Salmas, the 4th millennium B.C.

town of Shahr-e-Sukhteh in Sistan and Baluchistan. Tappeh Yahya near Kerman, a 4th-millennium settlement whose inhabitants played a key role in the spread of civilization from west to east, which was provided by several clay tablets found on Tall-e-Malyan site, near Persepolis, believed to be the lost Elamite city of Anshan near Shiraz and many more are a testimony to Iran’s glorious and magnificent history and rich cultural heritage.

Many of these sites and a lot more can be fitted in our various itineraries to suit individual group interests. 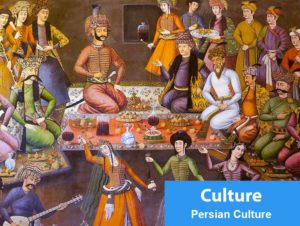 The arts of Iran (Persia) are one of the richest heritages in world history and includes many traditional disciplines such as architecture, weaving, pottery, Miniatures, painting, literature, music, calligraphy, metalworking, Carpets, stonemasonry and even more.

Iranian culture has been a predominant culture of the Middle East and Central Asia for a long time, with Persian considered the language of intellectuals during much of the 2nd millennium, and also the language of religion and the populace before that.

The Sassanid influence carried forward to the Islamic world. Much of what later became known as Islamic learning, such as philology, literature, jurisprudence, philosophy, medicine, architecture and the sciences were based on some of the practices taken from the Sassanid Persians to the broader Muslim world.

Iran’s official language is Persian (or Farsi). Persian serves as a lingua franca and most publications and broadcastings are in this language.

Along with Persian, there are many publications and broadcast languages in Iran such as Turkish, Kurdish and Azari and even less popular ones such as Arabic and Armenian. Many languages originated in Iran, but Persian is the most used one in this country.

The Persian language belongs to the Iranian branch of the Indo-European family of languages. The oldest records in Old Persian language date back to the Achaemenid Empire and examples of it have been found in present-day Iran, Turkey, Iraq, and Egypt. Persian is spoken today in Iran, Tajikistan, and Afghanistan, but was historically a more widely understood language in a large area ranging from the Middle East to India, vast populations of speakers in other Persian Gulf countries, as well as large communities all around the World.

Persian, even until recent centuries, was culturally and historically one of the most important languages of the Middle East and regions beyond. For example, it was a prominent language during the reign of the Moguls in India. it was used in the courts of Mogul India and ended in 1837, banned by officials of the East Indian Company (British Colonialism).

Persian scholars were prominent in both Turkish and Indian courts during the 15th to 18th centuries in composing dictionaries and grammatical works. The name of the Persian language is sometimes mentioned as Farsi.

The majority of Persians are Muslims, today most of the Shia sect, became the main religion of Iran during the Safavid dynasty. before the Islamization of Persia, they were Zoroastrians for about fifteen hundred years or Manichaeans or followers of some other Iranian religion such as Mithraism.

Persians are aware of these phases of history and the different spiritual world, but while embracing their Islamic culture they have not rejected their ancient past. This joining of Islamic spirituality and the Persian thought released intellectual power which soon made Persia the philosophic, scientific and literary center of the medieval world.

If you have no sympathy for human pain       The name of human you cannot retain.“

These verses by one of the greatest Iranian poet Saadi from the 13th century are written on the United Nations building entrance in New York. We can distinguish two periods of Persian poetry: one traditional, from the 10th to nearly mid 20th century, and the second modernist, from about World War II to the present.

One may define this style (known as Khorasani, from the association of its earlier representatives with Greater Khorasan) by its dignified tone, lofty diction, and highly literate language. The second, from the 13th to the 15th century, is marked by its lyric poetry, as a result of the development of the Ghazal into the most significant verse form, and the dispersion of mystical thought.

Its style is generally known as Iraqi because of the association of its earlier exponents with central and also western Persia, even though its two major representatives, Saadi and Hafez, were from the southern province of Fars. it is famous for its lyric quality, mellifluous meters, tenderness of feeling, and the relative simplicity of its language. 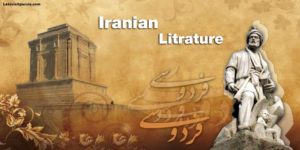 Ferdowsi‘s immortal poem, the Shah Nameh, is epic poetry and the height of its achievement as the greatest monument of Persian language and one of the major world epics story, it consists of about fifty thousand couplets relating the history of the Iranian nation in legend, myth, and fact, from the beginning of the creation of the world to the fall of the Sassanian Empire.

Ferdowsi, who was well versed in Iranian pure cultural heritage and lore, totally understood the sense and direction of the work he was verifying. His thirty years of labor produced a magnificent epic of tremendous impact.

The culmination of unique Persian lyric poetry was reached a hundred years after Saadi with Hafez, the most popular of Persian poets. His Ghazals are typical in their content and motifs but exceptional in their combination, elegance of diction, powerful expression and felicity of imagery.

His worldview surrounds many Gnostic and mystical sentiments, which were the common cultural heritage of his age.

Hafez’s Gnostic longings and his philosophical outlook impart an exalted air of wisdom and detachment to his poems. He is above all a poet of love who celebrates in his poets the glory of human beauty and the passion of love.

Nima Yushij (1897-1960), the father of Iran modernist poetry, and writing free verse. By the late 1950s, it had become the major mode of avant-garde Persian poetry. In modernist poetry, all thematic, formal canons, and imagistic conventions are by and large abandoned, and poets are felt free to adapt the form of their poems to the requirements of their tastes and artistic outlooks.

Iranian official calendar is the Solar year & Iranian months. 21 March is equal to 1 Farvardin, beginning of Iranian New Year which is called Nowruz. Also in Iran, the Lunar calendar announces officially. The lunar year is 10 days less than the Solar year, so days of performing religious rites, that adjust according to the Lunar calendar, each year is different from next & former years.

Thus it is recommended to tourists that arrange their desired traveling time with the related agency or tour guide. In Ramadan month Iranian Muslims are fasting and Muharram is a mournful month, so these situations influence your activities and some days in these two months are public holidays. Friday is the official holiday in Iran. 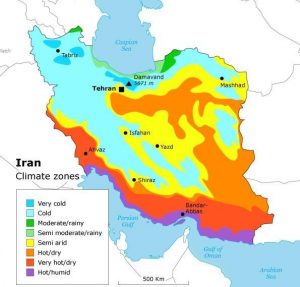 Iran is located in southwest Asian, A country of mountains and deserts. Eastern Iran is a high plateau with large salt areas and vast sand deserts. The plateau is surrounded by mountains, including the Zagros to the west and the Elburz to the north.

Its neighbors are Turkmenistan, Azerbaijan, and Armenia on the north, Afghanistan, and Pakistan on the east, and, and Turkey and Iraq on the west. Tehran is the capital, the country’s largest city and the political, cultural, commercial and industrial center of the nation. Iran holds an important position in international energy security and world economy as a result of its large reserves of petroleum and natural gas.

The eastern and central parts are arid, with less than 200 mm (7.9 in) of rain and have occasional deserts.  Summer temperatures exceed 38 °C (100.4 °F). The coastal plains of both the Persian Gulf and the Gulf of Oman in southern Iran have moderate winters but very humid and hot summers. The annual precipitation ranges from 130 to 350 mm (5.3 to 14.0 in).