Chaharshanbe Soori or festival of fire is an ancient Persian festival held on the eve of the last Wednesday of the Iranian calendar year and it starts on Tuesday evening. It symbolizes good health, light, and purity.

It’s a fire jumping festival, full of customs and rituals and it marks the arrival of spring and Nowruz. Chaharshanbe means Wednesday in Farsi and Soori means both Red and Celebration.

Before the festival starts, people gather brushwood and making bonfires in various open areas. At sunset, after making bonfires, they jump over the fire flames and sing. 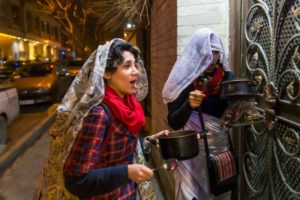 They wish the fire to take their pallor, sickness, and problems and turn it to redness, warmth, energy, and health.

Jumping over the bonfire symbolizes burning all that bad, negative energy, unhappiness, sickness and problems and looking forward to a new beginning.

This night has a ritual similar to trick or treating that is called Ghashogh Zani which means spoon banging that resembles a blend of Halloween and New Year’s Eve.

Girls and boys wear disguises and go door to door hitting their spoons against bowls to receive nuts, snacks, and sweets. It is believed that eating these nuts and sweets in Chaharshanbe Soori will make your wishes come true.

The origin of this ancient festival dates back to at least 1700 BC, during the early Zoroastrian era. Ancient Persians celebrated a festival the last five days of the year in honor of the spirits of the dead. 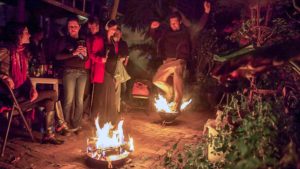 Today this festival is referred to Farvardigan festival. They believed that the spirits of the dead would come for a reunion.

The festival also occurred at the same time with festivals celebrating the creation of fire and humans. In the Sassanid era, the festival was separated into two distinct pentads, known as the lesser Panje and the greater Panje.

The belief had gradually developed that the Lesser Panje belonged to the souls of all children and those who died without sin, whereas the Greater Panje was for all souls.

Today, you’ll see versions of the Chaharshanbe Soori festival are celebrated all over the world including American, Canada, and the Netherlands.