Muharram the first month of the Islamic calendar, the month of remembrance, is a month full of special ceremonies and one of the unique times to travel to Iran.

Visiting Iran during these days can be a truly extraordinary experience and a fascinating time to travel. 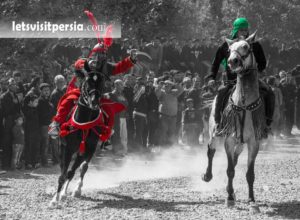 Ashura and Tasua, the 9th and the 10th day of Muharram, are days of mourning in Shia Islam to commemorate the martyrdom of Imam Hussein, a grandson of the Prophet Muhammad.

Ashura and Tasua ceremonies are cherished in many different countries, especially Iran because of their high concentrations of Shia Muslims. It is honored in most parts of Iran through different shows.

Shiite take part in processions and services of this month. They wear black during this period to signify the depth of their mourning.

Many of pious adherents begin mourning from the first night of Muharram and continue for ten nights, climaxing on Ashura and Tasua.

Ashura is the most important day of Muharram because on this day Imam Hussein and his family and 72 of his companions were slaughtered by the Umayyads in the Karbala desert on Yazid’s orders. Other surviving members of Imam Hussein’s family or followers (including women, children, and elderly people) were taken captive. 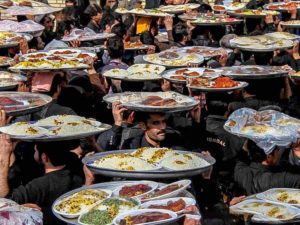 They were martyred in the name of justice and freedom, that’s why Imam Hussein is a symbol of resistance against tyranny.

In Iran, for the first ten days of the month believers march in the city with the rhythm of drums and religious songs and participate in mourning ceremonies and ritual chest-beating.

This ritual of Muharram is done by slightly hitting the body by hands or the shoulder by chains.

At the end of every ceremony, it is customary for mosques and some people to provide free meals and distribute it to the participants and to the poor.

This cooked food is offered as a pledge or Nazri to Imam Hussein.

Muharram is also commemorated by Tazieh.

Tazieh, a kind of street theatre in a costume inspired by historical and religious events, is a Shiite Muslim ritual that narrates the epic struggle and tragic martyrdom of Imam Hussein and his companions by the army of Yazid.

In Tazieh, Imam Hussein supporters appear in white and green clothes, while the opponents are dressed in red or yellow.