Abyaneh, also known as Abyaneh Red village (because of its red soil and houses) is a historic village in the central district of Natanz in Isfahan province of Iran, 70 kilometers southeast of Kashan and It is 2,500 meters above sea-level.

The word ‘Abyaneh’ has been borrowed from the word “Viona” meaning Willowy. It is one of the oldest human settlements in Iran’s dessert. 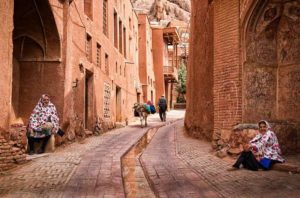 During the Arabs invasion of Persia in the 7th century, many followers of the Zoroastrian religion ran from their own houses and fled to the surrounding mountains or deserts to escape forced conversion to Islam.

The village extends along a river. Although the village itself is situated on high grounds, in the past three castles were built to protect the people from enemies. Furthermore, the configuration of the village protects it from strong wind and flood.

The oldest building in Abyaneh is Harpak Zoroastrian Fire Temple, which was built during the Achaemenid period (550-330 BC).

The fire temple used to be an important religious temple for its majority Zoroastrian inhabitants until Islam was fully accepted by the locals. But its golden period was during the Safavid dynasty.

Abyaneh Red Village is like a living anthropological and architectural museum. It presents an interesting model of adaptation to the environment.

Similar to other mountainous villages of Iran, such as Masouleh or Uraman Takht, Abyaneh has stepped architecture with the roof of each house is the courtyard of the one above it but Abyaneh has kept its traditional architecture, culture, ceremonies, clothing, language, etc. that is why this historical village is on the Tentative List of UNESCO World Heritage Centre. 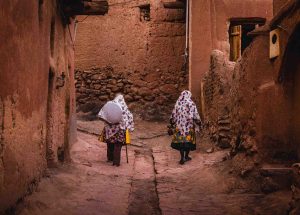 Abyaneh has a compact texture with steep and narrow alleys. Located on the slope of the mountain, Timbers, clay, and straw have been used for building the roofs.

The terrain all around the village contains iron oxides which give a unique reddish color. Because the houses are built with mud bricks and the same red soil, they have the same color as the rock above the village.

The walls and Houses, built from red mud bricks which are impressive. The houses have been built facing towards the east to get the maximum sunshine.

The simplicity of the houses and people presents a picture of life in rural Iran. For example, a single room may be used as a sitting room, a dining room, a guest room, and a bedroom. The rooms used in cold seasons are architecturally different from those used in warm seasons.

To provide lighting for all parts of the house, there are several small windows around the walls. The size of the rooms, doors, and windows all indicate the simplicity of life in this ancient village.

A stunning aspect of Abyaneh’s architecture is that the houses are similar in appearance. Most of the doors have two knockers, are wooden and built in traditional styles. There are beautiful designs, Quranic verses or poems and sometimes names of the owners and mason carved on the doors. These poems show a good picture of the old Iranian culture. Many facades date back to the Safavid dynasty. There are small sitting places that provide places for passers-by or residents to rest for a while. 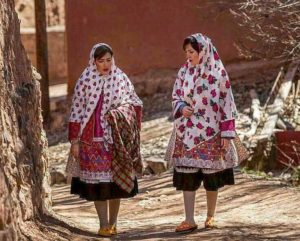 Most of the houses in Abyaneh have balconies that protrude into the alleyways and designed with colorful flowers.

One of the most eye-catching designs of most ancient wooden doors in Iran is the door knockers.

Each house usually has a pair of doors, which are equipped with different door knockers. One of them has a long shape, while the other one has a round shape.

These two-door knockers have different sounds, which gives a clue to the owner whether a male or a female knocks the door. A female house owner answers the door if the caller is a female and vice versa. If there are no men in the house, then the woman can be prepared and wear a hijab if a male is behind that door.

The language spoken by the local people of Abyaneh is Parthian Pahlavi. They are extremely committed to honoring their traditions. No matter how well educated a local might be, he or she wears traditional Abyaneh costume on coming back to the village. 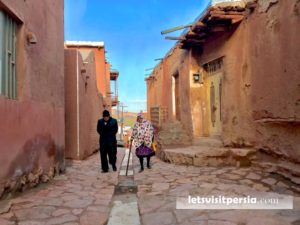 Their traditional clothes are examples of styles of great antiquity. It is said a woman from Abyaneh has inherited her wedding dress from her grandmother.

Women typically wear a white long scarf that covers the shoulders and upper trunk which has a flowered pattern named Charghad and an under-knee skirt and men a very loose pair of pants with a coat.

These people have strongly maintained this traditional costume.

Although this village is small in size, it has many untold stories inside the minds of its locals and there are many mysterious things to be explored by the visitors who love discovering and exploring new things about the past.

All the above-mentioned have made this village worth a visit by any tourist visiting Iran without a doubt.

Decorations made of wild rue seeds